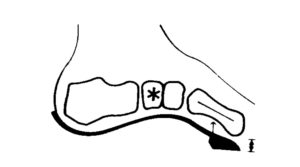 Extrinsic Forefoot Posting
This method of forefoot posting is accomplished by placing crepe directly under the front of the orthoses, wedging the forefoot into its neutral or desired position. This type of posting may not allow the metatarsal heads to reach the supporting surface and could induce jamming at the metatarsophalangeal joints. This type of posting also adds considerable bulk to the front of the orthoses, sometimes causing shoe fit problems. 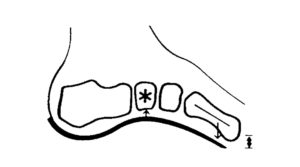 Intrinsic Forefoot Posting
Intrinsic posting into the cast allows the metatarsals to plantarflex to the supporting surface, decreasing jamming of the metatarsophalangeal joints and preventing the forefoot post from affecting the place of the rearfoot. 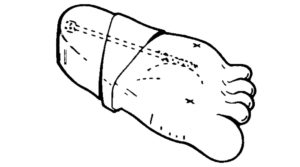 Triaxial Intrinsic Forefoot Posting
This technique allows the posting of the forefoot to be integrated directly into the plaster cast of the foot. By sectioning the midtarsal joints to their oblique axis, the forefoot can be rotated out of a varus or valgus position. This allows full posting of large degrees of deformity. Triaxial posting is often completed by incorporating a biaxial rearfoot post.

Extrinsic Long
An extrinsic forefoot post is added under the metatarsal heads, tapering off distally and becoming incorporated into a forefoot extension. The post is used in place of the intrinsic forefoot post. This posting is most useful when controlling forefoot varus or valgus in sports where heel contact is short or there are large amounts of side-to-side motion in the activity.

Runner’s Wedge
A runner’s wedge is incorporated in the same manner as the extrinsic long except with 3° of varus in addition to the forefoot intrinsic posting. 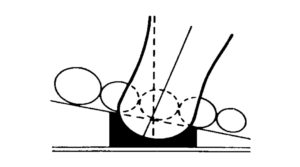 Extrinsic Rearfoot Posting
In this traditional method of posting, crepe is applied directly to the heel area of the device. 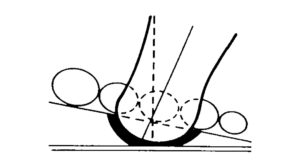 Modified Intrinsic Rearfoot Posting
The shell of the orthosis is ground at the heel contact point, either to the plane of the forefoot or in the desired degree of rearfoot. The amount of posting available is dependent on the thickness of the orthoses and is limited. It should not be confused with true intrinsic posting offered with biaxial or triaxial methods. 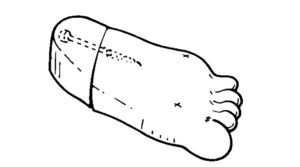 Biaxial Intrinsic Rearfoot Posting
In this process, the rearfoot section of the cast is sectioned to the axis of the subtalar joint. The rearfoot section can then be rotated into its desired position of varus or valgus. The advantage of this technique is that it allows the rearfoot to be posted independently of the forefoot, eliminating discrepancies between the plane of the forefoot and rearfoot sections of the orthoses. High degrees of deformity can be posted without affecting how the device fits in the shoe and prevents lateral slippage of the foot off the orthosis. Biaxial rearfoot posting can be incorporated into most orthoses and can be used independently or in conjunction with the triaxial posting.

Medial/Kirby Skive
A medial skive cast modification (Kirby Skive) is a rise or lift on the inside of the heel cup. It is available in mild (2mm), strong (4mm) and very strong (6mm). This cast modification increases the ground reactive force through the orthotic on the medial plantar side of the calcaneus, which decreases the tendency to evert and encourages inversion of the heel.

Pronation Skive
The amount of motion the orthotic has during the forefoot loading when the distal edge come to the ground. With a crepe extrinsic rearfoot post, the material will naturally compress to allow pronation. You can specify an exact amount of motion (eversion) ground into the post. A common request is 4° of motion.